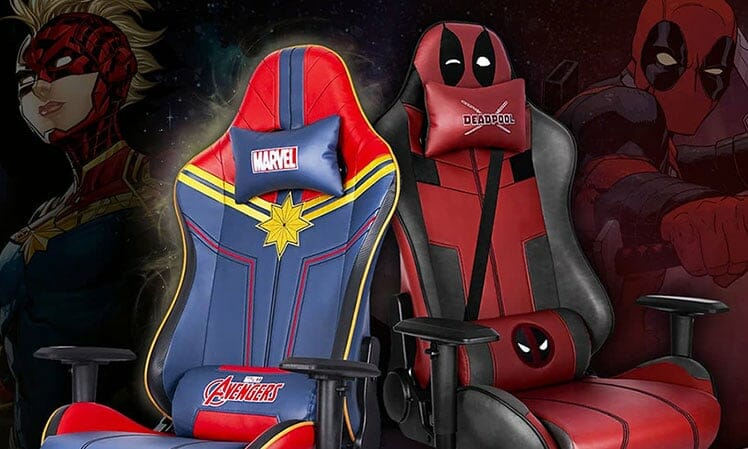 There are three variants of Marvel superhero chairs in the Neo Chair collection. This section summarizes each one.

Most gaming chairs under $200 come with 2D armrests or less. In comparison, ARC models come with 3D armrests, giving an extra dimension of adjustability.

All Neo Chair Marvel editions have the same features. Highlights include a deep recline, 3D armrests, and a lumbar massage pillow with vibrating massage functionality.

While most cheap gaming chairs are slim-fit, ARC Series chairs are spacious. The seats are deeper and wider than what other chairs offer in this price class.

These chairs have the same features and dimensions as ARC models (3D armrests, 180° recline, etc). However, all ARC-R models add a retractable footrest for enhanced usability.

These chairs come with the same features as the other models (3D armrests, deep recline, etc). The main difference is that RAP Series chairs come with flat, wide seats without ridged edges.

That provides enough space for slim users to sit cross-legged in the chair. It also gives those with wide hips or thick legs more space. RAP Series chairs include the same heroes as the other chairs, plus a Black Panther edition.

Dimensions are also the same as the other chairs. The RAP edition differs with its flat seat style and extra weight capacity (330 pounds).

Here’s a closer look at each of the superhero designs in the Neo Chair collections:

She has Class 50 superhuman strength (angry Hulk has Class 100). She can also fly through space, shoot laser beams, and manipulate molecules. Captain Marvel can defeat every member of the Avengers in battle, except for Thor (because he’s a literal God). 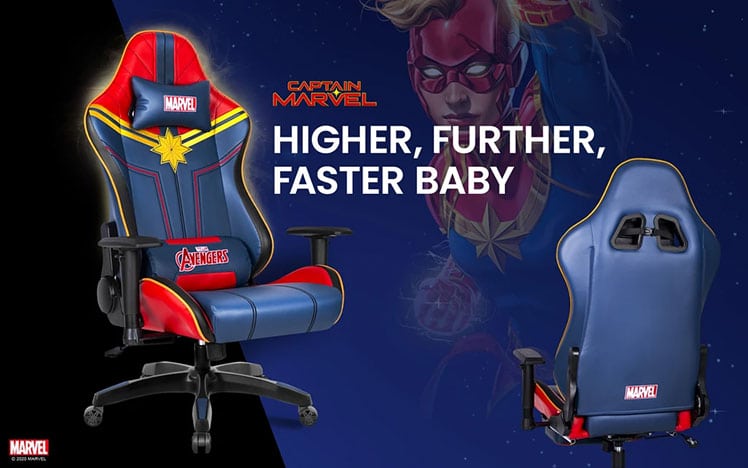 The Neo Chair Captain Marvel edition is one of the most striking gaming chairs on the market. It combines a blue base with striking red and yellow color accents. Emboidered on the front of the chair is Captain Marvel’s logo in stunning gold.

Captain Marvel is one of the most powerful and popular female superheroes. Thus, this chair can serve as a vibrant ‘girl power’ showpiece.

But it’s also a gorgeous chair that appeals to all genders. Among all superhero designs currently on the market, this is one of the most striking.

Wade Wilson was an expert with weapons and a gifted martial artist. After getting injected with a serum, he gained superhuman speed, strength, and agility. He is also ageless, with fast healing ability. That makes him an immortal completely — indestructible. 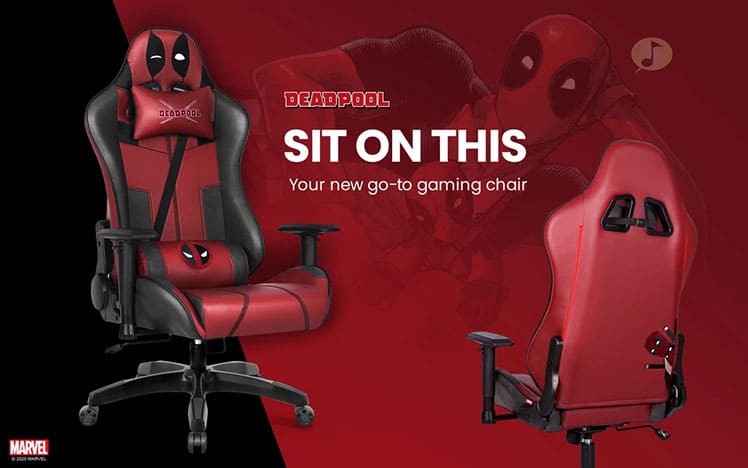 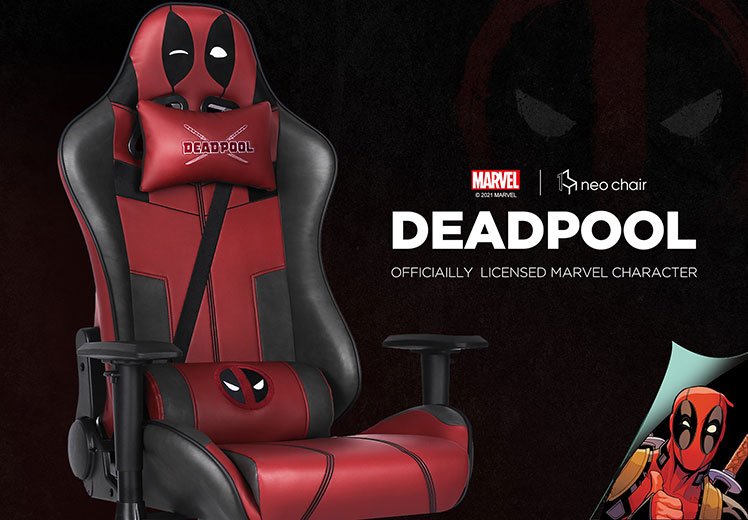 Deadpool’s eyes are embroidered on the top of the backrest. They’re also embroidered into the adjustable lumbar support pillow.

Like Deadpool, Steve Rogers gained his superhero powers from a serum injection. The super-solider injection made him stronger and faster, with world-class endurance. 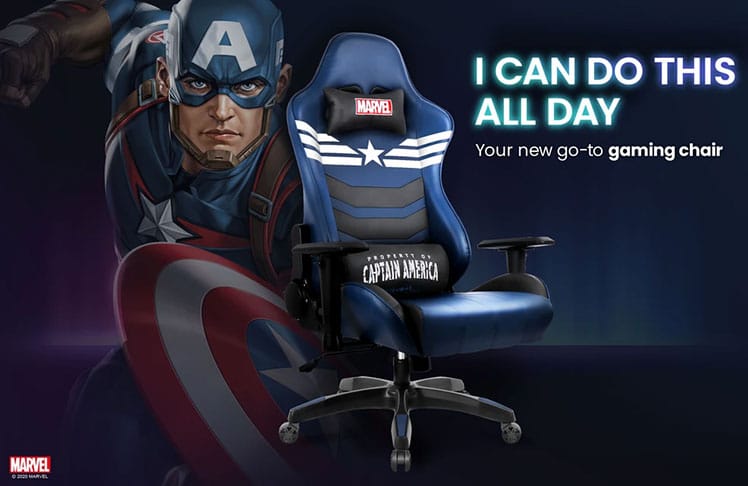 Neo Chair offers two Captain America designs. Both ARC chair models have a royal blue base with white and black color accents. Captain America’s star is embroidered onto the backrest.

This version has a wider seat plus a white and blue 2-tone design. It also comes with a 3-color Captain America shield embroidered on the backrest.

He makes tons of cash running Stark Enterprises while moonlighting on the side as Iron Man. Neo Chair ARC Iron Man chairs come with a black base with yellow and orange accents. Iron Man’s logo is embroidered on the seat and also the lumbar support pillow. 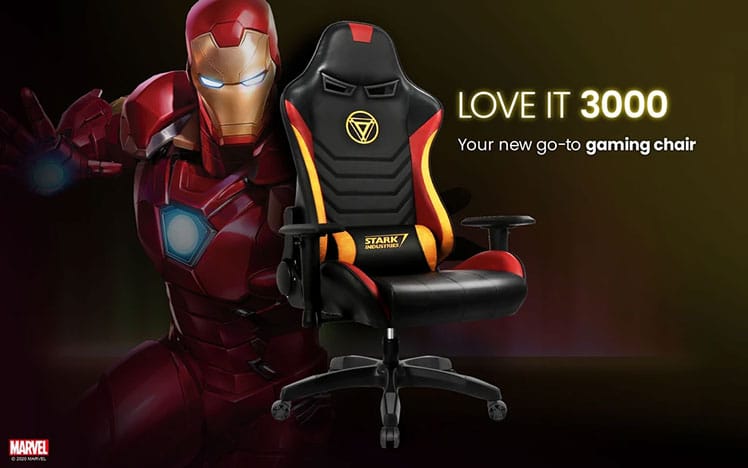 The RAP edition offers a wider seat and brighter design, with a vivid tri-color base. Iron Man’s head is embroidered on the backrest in gold.

The RAP Series model depicts Spidey’s iconic red and blue look. It has a two-tone base and a black embroidered spider on the backrest.

T’Challa is the king and protector of the fictional African nation of Wakanda. He is also the Black Panther. His powers resemble those of Steve Rogers. Black Panther has superhuman speed, agility, strength, and healing ability. 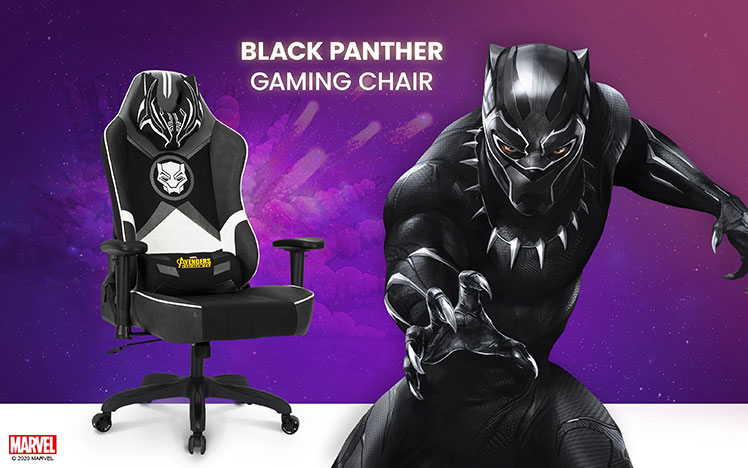 The Black Panther gaming chair is only available as a RAP (wide seat) model. It comes in a black, white, and grey tri-color design.

Black Panther’s logo is embroidered on the headrest. Another unique touch is this model’s boomerang-shaped headrest pillow.

Neo Chair Marvel edition gaming chairs offer excellent value for money. For one thing, they’re cheap. For another, they come with solid adjustable features. Best of all, the designs are stunning.