Official gaming chairs of the most popular video games

The video game industry is a money-making juggernaut. It generates billions in yearly sales from software, hardware, and also branded merchandise. Few branded items enhance the video game experience like a branded gaming chair. Check out the officially-licensed gaming chairs of the world’s most popular video games.

The world’s most popular video games generate extra hype via esports tournaments. At these tournaments, players use branded chairs from top brands like Secretlab and Maxnomic. Many top games also offer branded chairs for consumers.

Here we look at the most popular video games with officially-licensed gaming chairs. Games are ranked based on their 2020 impact rankings. The last game (Cyberpunk 2077) already has a branded chair, but won’t be released until November.

League of Legends (aka LoL) is a multiplayer online battle arena video game by Riot Games. Inspired by Defense of the Ancients (Dota 1), the game released in 2009. Games match players into groups of five. Each player chooses one of 138 “Champions” to play as for the duration. Teams work together to destroy the Nexus, the main building of the opposing team.

By 2012, League of Legends became the most played PC game in North America and Europe. Riot announced in 2019 that LoL was averaging 8 million concurrent players every day. In 2020, EsportsObserver ranked it the most impactful PC game in the world for the fifth straight year.

Secretlab signed a multi-year partnership with Riot Games in 2019. The deal was to provide chairs for the three premier LOL esports tournaments. At the LCS, Mid-Season Invitationals, and LOL World Championships, all players compete using Secretlab chairs.

In August 2020, Secretlab also released four official League of Legends branded chairs. These are the first officially branded chairs in the 10-year history of the game.

Three chairs capture the aesthetics of a particular League of Legends champion:

The fourth chair is inspired by K/DA, Riot’s virtual K-Pop star style skin line. It pays tribute to Akali (the K/DA rapper) with decadent purple, black and gold upholstery, plus diamond-quilted side wings. On the back of the chair is Akali’s signature dragon, embroidered with great detail in gold thread.

To learn more about each League of Legends design, check out our news report about the release.

Developed by Valve, Counter-Strike: Global Offensive (CS:GO) is a multiplayer first-person shooter. The fourth game in the Counter-Strike series, Valve released it in 2012. CS:GO is available for play on Windows, OS X, Xbox 360, and PlayStation 3. The game pits Terrorists against Counter-Terrorists. Terrorists work as a team to either plant a bomb or hold on to their hostages. Counter-Terrorists work to defuse the bomb or rescue the hostages.

These days, CS:GO is one of the most-popular and user-friendly first person shooter (FPS) games. On Steam, it reigns as the runaway most popular game, averaging around 500,000 concurrent players.

The Maxnomic Pro has been a favorite in the esports scene for a few years. Its most famous ambassador is Ninja, the world’s most popular streamer. The Maxnomic Pro is the basis of the official CS:GO chair. That comes with bright orange seams on black faux leather with dark blue inlays. On the back is an embroidered CS:GO logo.

The Maxnomic Pro comes stacked with pro ergonomic features. Those include 4D armrests, a multifunction tilt-lock, cold foam padding, and a 2-year warranty.

Maxnomic CS:GO from NeedforSeat for $429

Released by Epic Games in 2017, Fortnite is an online game with three game modes. The most popular Battle Royale mode is a player-versus-player game for up to 100 players. You can play 1-1, with a partner, or in 3-4 person teams.

The game starts as weaponless players airdrop onto a map. Then they scavenge for resources while trying to kill other players. Meanwhile, the map shrinks, forcing players into tighter spaces. The last group standing wins the game.

Fornite Battle Royale is available for the PlayStation 4, Xbox One, MS Windows, and macOS. It’s also available on iOS, Android, and Nintendo Switch.

Playing Fornite on a PC is different than playing it on a console. Consoles are usually living room or bedroom devices. In living rooms, gaming chairs don’t fit in as well as console gaming chairs do. Console chairs sit lower to the ground. They emphasize casual comfort over posture correction.

In late 2019, Epic Games partnered with Respawn on a series of official Fornite gaming chairs. It’s a natural fit. “Respawning” is a feature in Fortnite Battle Royale’s team-based modes. The gist is that you can ‘respawn’ fallen team members to get back into play.

There are five console-style gaming chairs and one racing style PC chair in the collection. The RAVEN-X Fornite chair is the racing-style PC gaming chair. It’s the most expensive Fortnite chair.

The Fortnite Raven-X is upholstered in decadent deep purple with grey accents. On the front, it has an embossed Fornite logo, leather lumbar straps, and stitching accents.

Dota 2 is the sequel to Defense of the Ancients (DotA). Released in 2013, this is a MOBA (Multiplayer Online Battle Arena) published by Valve. 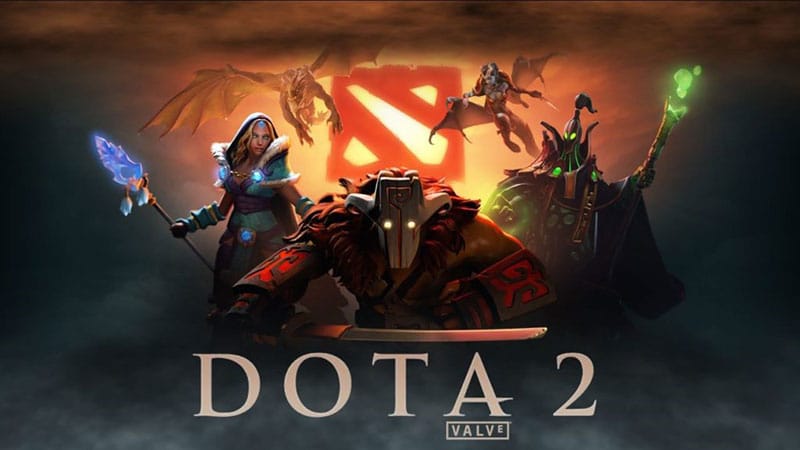 Valve is also the creator of the gaming platform Steam. Dota 2 is currently the second most popular game on the platform, trailing only CS:GO.

Secretlab’s official Dota 2 gaming chair comes in both Titan and Omega variants. The Titan ($429) is a larger chair with a wider seat and an internal lumbar support system. The Omega ($389) is a compact model that provides a snug fit and superb posture support.

Dota 2 chairs come in black PU leather. The Dota 2 logo is on the front and back of the chair. Embroidered Radiant and Dire iconography adorn the wings.

To learn more about these chairs, check out a detailed Secretlab Titan or Omega review.

Overwatch is a team-based multiplayer first-person shooter by Blizzard Entertainment. The game launched in 2016 to big acclaim. Critics and users raved about the diverse characters, accessible play, and cartoony style. Today, Overwatch ranks as the 10th most impactful game of 2020.

Overwatch assigns players into two teams of six. Each player chooses a hero from a roster of 30. Players work together to defend points on a map or escort payloads across the map in limited time.

20 years ago in Overwatch lore, a massive Omnic Colossus attacked South Korea. Rising from the East China Sea, it caused catastrophic damage. In response, the South Korean government developed a mechanized drone unit called MEKA. But the monstrosity adapted. Desperate, the government turned to pro gamers to serve as pilots.

Hana Song (also known as D.Va.) is a fierce competitor who plays to win at all costs. She has a well-earned reputation for showing no mercy to her opponents.

The quality of both models is superb. Each comes with a 3-year warranty extendable to five years.

To learn more, read reviews of the Secretlab Titan and Omega.

DOOM launched in 1993 as one of the world’s early first-person shooter (FPS) games. In 2016, developers id Software and publisher Bethesda Softworks rebooted the franchise. Then, DOOM released versions for PC, Xbox One, and PS4.

DOOM Eternal is the sequel to DOOM, released in 2020. Players take on the role of the Doom Slayer, an ancient warrior battling Hell’s demons. 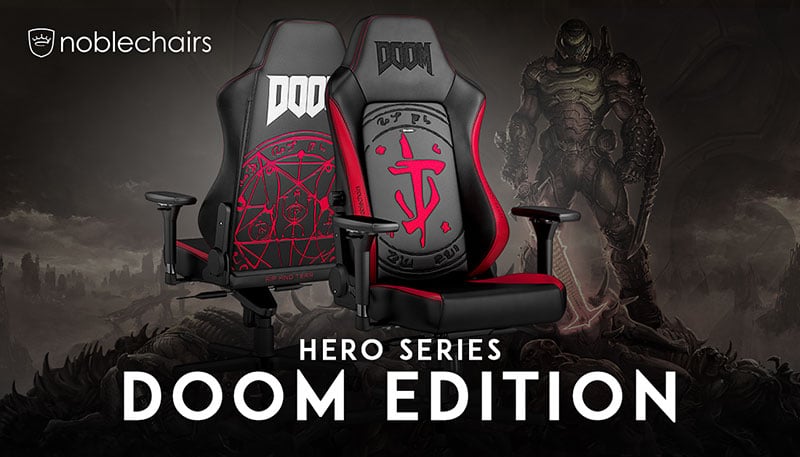 In August, 2020, Noblechairs released the Hero DOOM Edition. This is an all-black chair with blood-red accents. The iconic mark of the DOOM Slayer is embroidered on the front of the chair. Embroidered on the back are DOOM rune markings.

The Noblechairs HERO is a luxurious pro esports chair designed in Germany. This chair stands out with a depth-adjustable internal lumbar system and premium ergonomic features.

Europeans can buy the HERO from the Noblechairs website for €419.90. North Americans can buy it from Newegg.

HERO DOOM edition from Noblechairs for €419.90

In April, 2020, Noblechairs announced a partnership with Bethesda Softworks.
The Fallout Vault-Tec Edition is the first release from that partnership. It’s a customized Noblechairs HERO. That is a large chair with internal lumbar support and pro ergonomic features.

This model comes in blue and yellow upholstery. Vault-Tec’s mascot gives the thumbs-up on the front and back of the chair.

To learn more about the HERO chair, check out our detailed Noblechairs HERO review.

Cyberpunk 2077 is a role-playing game with an elaborate open-world design. Every choice that a player makes causes ripple effects through the rest of the story.

The game is set in Night City, a fictional megalopolis on the west coast of America. Secretlab Cyberpunk 2077 chairs draw on Night City’s rich lore with distinctive design elements.

The chairs come with neon yellow upholstery accented with turquoise stitching along the edges. Paying tribute to the future tech dystopia, barcodes flank the wings, with electrical traces flowing down the backrest. On the back is a large logo for the chrome rock band Samurai. In the game, Samurai lead singer Johnny Silverhand is played by Keanu Reeves.

When the game is released in November, these chairs will become a regular part of the Secretlab roster.

Gaming chairs are good for your back. They support good posture and movement while letting you sit comfortably for long periods.

Fans of all games listed in this article are sure to spend long periods playing. PC gamers will spend that time sitting in front of a desk. There, Secretlab and Noblechairs offer superb options. Both are high-end gaming chairs that are good for the back. The gist is that they support good posture and movement over long gaming sessions. As a result, gamers can enjoy many benefits including better posture, improved health, and improved vitality while computing.

Are you a desk worker seeking a performance edge at the computer? The best gaming chairs for office workers have pro ergonomic features and classic executive styling. These high-end chairs help desk workers to sit longer, feel better, and be more productive.
Read more
Accessories

Xbox and PS5 console gaming chairs to play like a pro