Secretlab has been partnered with Riot Games since 2018. Riot is the publisher of League of Legends (LOL), one of the world’s top esports video games. Early on, Secretlab furnished chairs for LOL tournaments. In mid-2020, Secretlab added Ionia Collection hero chairs. There is also a pair of K/DA Edition chairs in the collection. This article keeps track of all Secretlab League of Legends gaming chairs.

Secretlab has a strong partnership with League of Legends publisher Riot Games. As the game’s popularity grows, more Secretlab LOL chairs may emerge. As that happens, we’ll add those editions to this article.

About League of Legends

League of Legends is one of the most popular video games in the world. It’s also one of the most lucrative titles for pro esports players. In 2019, the game had over 100 million players worldwide, with 8 million daily peak concurrent players.

Riot Games released League of Legends in 2009. The premise of the game is to destroy the opposing team’s “nexus” (their home base). The player controls a champion with unique skills, within a team context. Teams battle to destroy the other team’s base while protecting their own. Success requires fast reflexes, sharp hand-eye coordination, and good communication skills with teammates.

The game is free to play. Costs happen through microtransactions using in-game currency called Riot Points. Points let users buy champions, champion skins, multi-game boosts, and more. Because of the team-based nature of the game, it shines as a competitive esports title. Around 80% of the group’s fanbase are American males aged 25-34. Each year, pro gameplay culminates in a World Championships. That event consistently draws massive viewer numbers:

In America, the average LOL player spent around $92 on the game in 2019. With millions playing, that revenue model has been lucrative. In recent years, LOL revenue consistently exceeds a billion dollars USD.

At first, the deal was for Secretlab to provide chairs for three LOL events. Those are the North American LCS, the Mid-Season Invitational, and the World Championships. In mid-2020, Secretlab added Ionia hero and K/DA chairs to the collection.

Secretlab League of Legends gaming chairs come in Omega (small-sized) and Titan (large) variants. All Omega models cost USD $449, while Titan versions cost $489. Secretlab sells LOL chairs in North America, Europe, the UK, Australia, Singapore, and South Korea. All chair links in this article are geo-tagged to go to the appropriate store for your location.

Check our Omega vs. Titan comparison to see the differences between the two models.

To learn more about the Omega, check out our detailed Secretlab Omega 2020 Series review.

K/DA Pop Stars and All Out editions 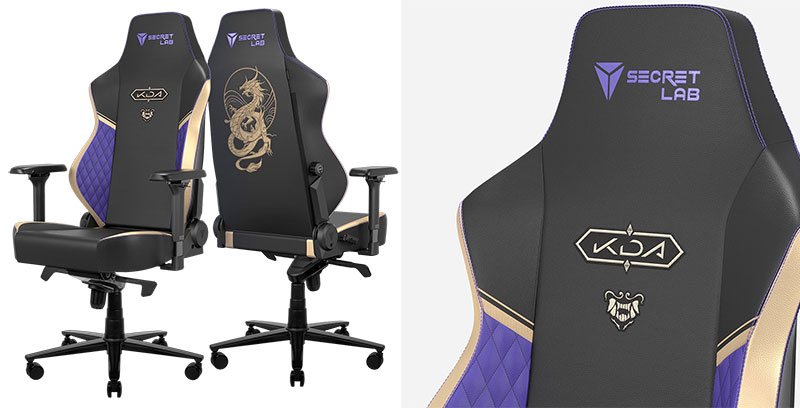 The K/DA Pop Stars Edition is inspired by Akali, the group’s rapper. Upholstered in lush purple and gold, it pays tribute to Akali with diamond-quilted side wings. On the back is Akali’s signature dragon, embroidered with gold thread.

After a 2-year hiatus, K/DA is back with a fresh new look and musical style. The design brings K/DA’s new visual concepts to life with fractal embroidery and iridescent accents. 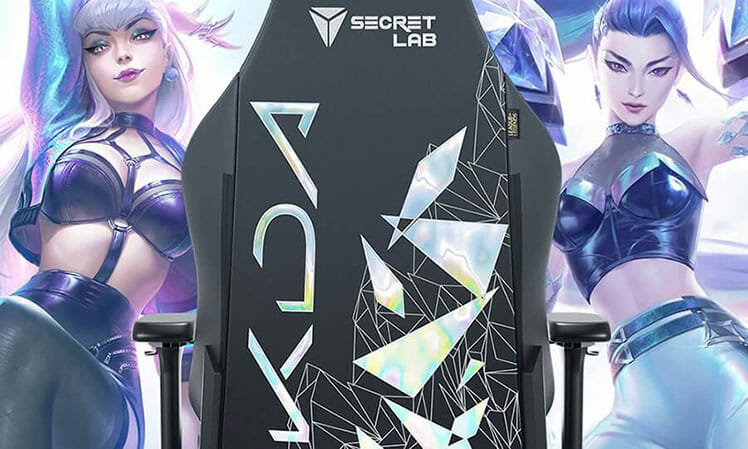 On the front of the backrest are four icons representing each K/DA member. There is Ahri the Queen, Evelynn the Diva, Kai’Sa the Dancer, and Akali the Rebel. To learn more, check out our report of both K/DA chair designs.

Akali is also a rogue assassin. The Akali special edition shows off her kama blade and kunai dagger on the front of the chair.

On the back, a sprawling dragon tattoo is embroidered with incredible detail. The wings and seat base also show off details drawn from Riot Games’ 2018 rework of Akali’s classic skin.

This decadent red wine-colored chair shows off Ahri’s foxfire on the front of the chair, with her nine tails on the back.

This deep navy blue chair shows off the master swordsman’s katana on the front and a veritable tempest on the back. The wings are embellished with the wind and clouds in the traditional ukiyo-e art style of Yasuo’s armor.

For other Secretlab video game designs, check out our review of the best official video game chairs. Other models pay tribute to Cyberpunk 2077, World of Warcraft, Dota 2, and Overwatch.