The Game of Thrones Iron 10-year anniversary is upon us. To celebrate, Secretlab has released a new Iron Anniversary Edition gaming chair. It tops a collection that includes chairs from Houses Targaryen, Stark, and Lannister. No matter what house you’re identify with, there’s something cosy here just for you.

In April 2011, Game of Thrones premiered on HBO. To mark the occasion, HBO is holding a lavish recollection of the series.

As part of the celebration, Secretlab has added a fourth Game of Thrones gaming chair to its collection.

All models are available in Titan (large) and Omega (small) variants. The Titan is a larger chair with a flat seat and integrated lumbar. The Omega is a smaller chair with bladed seat edges and a memory foam lumbar pillow. Check out our Titan vs Omega comparison for detailed specs of both chairs.

Here is a look at all Game of THrones chairs in the Secretlab collection. Beyond the new Iron anniversary edition, there are three other designs. Each represents one of the great houses in the Game of Thrones story.

The Game of Thrones is played by the great Houses of the Seven Kingdoms. It refers to the scheming and machinations of Houses as they seek to grow their wealth and power. 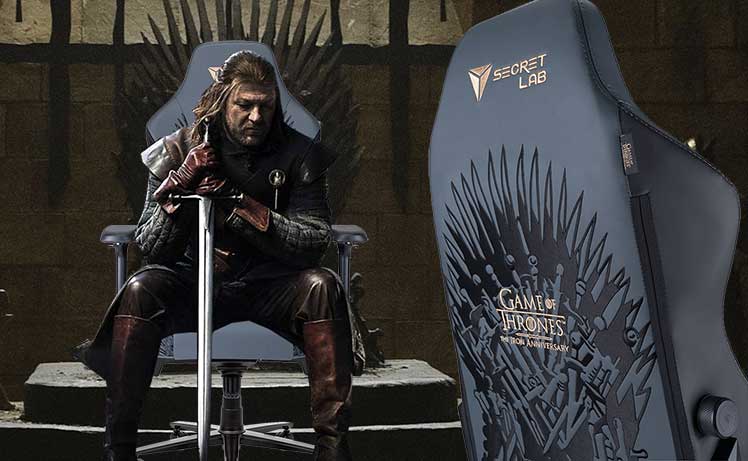 The ultimate prize is the Iron Throne. This seat of power was forged at the order of Aegon the Conqueror. It was made out of 1,000 swords surrendered in the War of Conquest.

These were melted down by Aegon’s dragon, Balerion the Black Dread. The swords were then forged into a throne of imposing appearance. 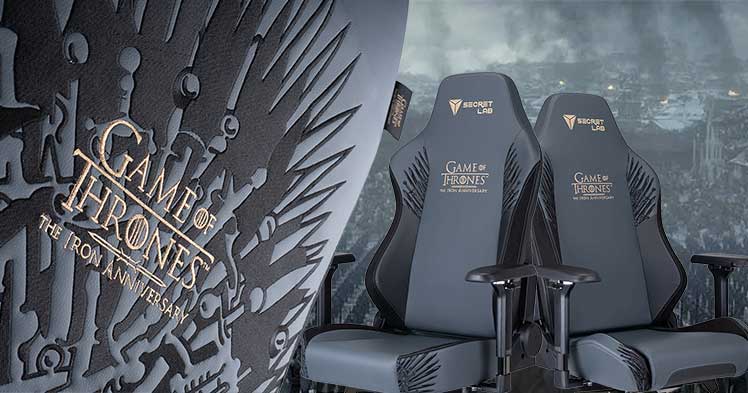 Now, it’s possible to rule your own kingdom with a Secretlab Iron Anniversary gaming chair. These models have a dark grey leather base embroidered with iconic iron throne artwork. The combination matches well with more somber themes throughout the show’s history.

The Omega Iron Anniversary edition is also available for $389. Both models are available in North America, the UK, EU, Oceania, and Singapore.

The Secretlab House Stark gaming chair has a cool white base with black accents. The embroidered Direwolf sigil on the backrest is both subtle and menacing.

It blends well into either corporate or creative spaces. While sitting, it looks like an average high-back office chair. But when out of this seat, you’ll be guarded by your own personal house wolf.

The Omega House Stark edition is also available for $359. Both models are available in North America, the UK, EU, Oceania, and Singapore.

House Targaryen ruled the Seven Kingdoms for centuries. This Valyrian family’s sigil is a three-headed dragon breathing flames. Its House words are “Fire and Blood”.

The dynasty ended with the death of Aerys the Mad King during Robert’s Rebellion. The two surviving children of Aerys (Viserys and Daenerys Targaryen), fled into exile in the Free Cities of Essos.

The House Targaryen gaming chair starts with a black base. Dragon-scale carbon leather adorns the side wings. A red Targaryen dragon is embroidered on both sidesof the chair in brilliant red.

It’s a stunning design that evokes their Fire and Blood ethos of bloodline-centricity.

The Omega House Targeryen edition is also available for $359. Both models are available in North America, the UK, EU, Oceania, and Singapore.

House Lannister is one of the Great Houses of Westeros. Their seat is Casterly Rock, a land in the far west of the continent. It overlooks the thriving city of Lannisport. There exists the most productive gold mine in the Westerlands. 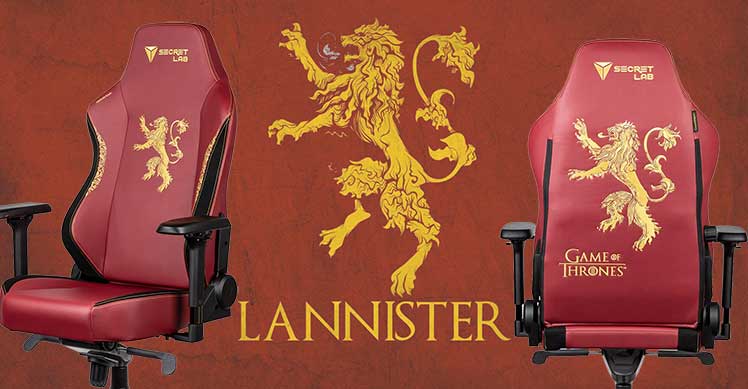 The House was defeated by Aegon and his dragons. As a result, they served that regime, and also its successor, King Robert Baratheon.

The House Lannister gaming chair reflects the monied lineage of the house. It has a red leather base, black accents, and brilliant golden lion embroidery.

This model enjoyed a resurgence recently when GME investment guru DeepF***ingValue emerged. He led a Reddit-driven battle against billion-dollar hedge funds and won.

His House Lannister chair was the perfect choice to ride into financial battles with. Check out the Gaming Chairs used by Top Stock Traders to learn more.

The Omega House Lannister edition is also available for $359. Both models are available in North America, the UK, EU, Oceania, and Singapore.

Beyond the Game of Thrones collection, Secretlab has several other brilliant ones on offer. Here are a few worth considering:

League of Legends is one of the most popular (and lucrative) esports video games in the world. Secretlab’s collection includes hero-inspired chairs, K/A chairs, and Championship tourney chairs.

The annual League of Legends Finals is one of the highlights of the global esports calendar. This year’s Finals takes place in Shenzhen China in November.

In the run-up to that event, Secretlab usually releases new LOL chairs. There will likely be new World Championship chairs, a new K/DA edition, and a few surprises.

Many of the world’s top esports teams use Secretlab chairs for training. Secretlab has custom designs for big names like Team Liquid, OG, Evil Geniuses, Team Secret, Cloud9, and many others.

All models come in Titan (large) and Omega (small) editions. Below is a summary of every pro esports team design in the Secretlab collection.

Styles range from a soothing pink to a trio of more conservative designs. For a closer look at the pros and cons of each Softweave color, check this article:

Game of Thrones was captivating for millions. The new Iron Throne Anniversary edition is a chance to look back on the best parts of that journey.

This steel-grey leather gives it an almost corporate feel. That balances out with the stunning embroidery and subtle black color accents.

It’s the ultimate seat of power for a Game of Thrones fan. If not quite ready for Kinghood, maybe a House Targaryen, Stark, or Lannister chair will do.

Want more info about Secretlab chairs? Get a comprehensive look at all models, designs, and specs below:

Review of the entire Secretlab collection

What gaming chairs are pro athletes using in 2021?